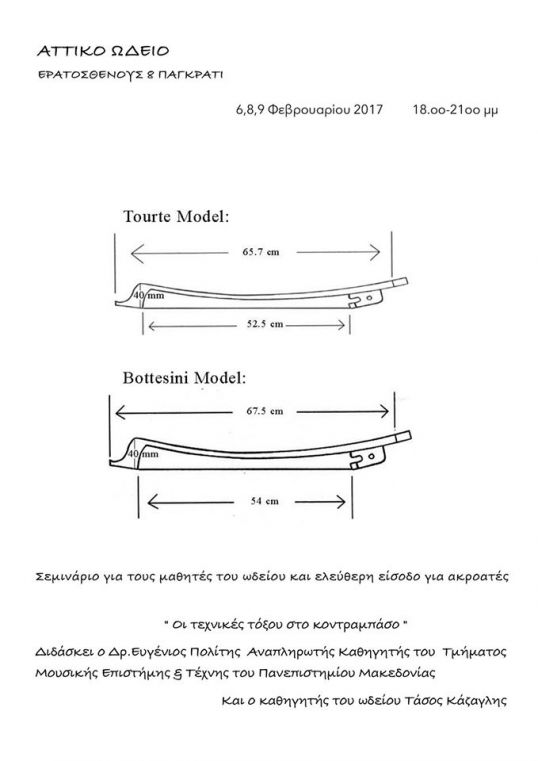 Doublebass master class for the students of the conservatory and free admission to audiences on "Double Bass Bowing Technique" took place on 6.8 and 9 February 2017 at the Attiko Conservatory with Dr. Evgenios Politis, Associate Professor of Music Science and Art, University of Macedonia in Thessaloniki and Professor of the conservatory Tasos Kazaglis.
Evgenios Politis
Born in Thessaloniki – Greece ιn 1958. He studied at the “Hochschule für Musik und Darstellende Kunst Wien” under Prof. Heinrich Schneikart (1978-1985) and graduated with Diploma in contrabass .
He was awarded the title “Magister der Künste” after his Thesis “Die Griechische Konzertliteratur fϋr Kontrabass”, by the “Universität für Musik und Darstellende Kunst Wien” (1999-2002), and DMA/PhD title by the Department of Music Studies of the Ionian University after his Dissertation «The Greek composers” unpublished works for double bass and piano in the 20th century Greece». He attended master classes under Prof. Jorma Katrama (2001) and Prof. Duncan Mc Tier (1996).
He taught contrabass at the Synchrono Conservatory of Thessaloniki (1985 – 2003) and performed in public recitals as a soloist with orchestra, as well as part of chamber music ensembles. As a member of the Macedonian Chamber Music Ensemble, he won the 1st prize at Hellexpo’s 2nd Hellenic Chamber Music Contest in 1992.
He was the principal bassist and a founder member of the City of Thessaloniki Symphony Orchestra (1987-2003).
Since 2003 he is teaching double-bass at the Department of Music Science and Art at the University of Macedonia in Thessaloniki.